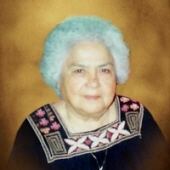 Services for Herminia Villarreal, 83, of Brownfield will be held at 10 am Wednesday, September 26, 2018, at St. Anthonys Catholic Church with Father Joe Kochuparambil officiating.
Visitation will be held from 5-7 pm, Rosary 7-8 pm on Tuesday, September 25, 2018, at Brownfield Funeral Home Memorial Chapel.
Herminia was born on June 27, 1935, to Timoteo and Maria Fonseca in Santa Rosa. She passed away on Sunday, September 23, 2018. Herminia was married to the late Luis E. Villarreal Sr. for 25 years and had five children. She was a migrant teacher for several years at Meadow ISD. She enjoyed spending time with her grandchildren, crafting, watching cops and western movies and having her daughter/caregiver Gloria take her to garage sales in Lubbock every Saturday even though getting into the car became very difficult. Herminia and her family are very grateful for the kidney she received from a precious donor that extended her time with her family for another 19 years.
Herminia is preceded in death by her son, Enrique Villarreal; daughter, Guadalupe Villarreal; parents, Timoteo and Maria Fonseca; 5 brothers, Ezequiel, Ismael, Israel, Jesus, and Raul Fonseca and 2 sisters, Elvira Cortez and Maria Reynero.
Herminia is survived by her 2 sons, Hector Villarreal and wife Juanita of Grandbury and Luis Villarreal, Jr. and wife Janetta of Abernathy; daughter and caregiver, Gloria Salas of Brownfield; 7 grandchildren; 15 great-grandchildren; brother, Martin Fonseca and wife Mary of Brownfield and 6 sisters, Elodia Loredo and husband Elijio of La Feria, Eloisa Torrez of Weslaco, Eliza Jimenez of Andrews, Elida Elizondo of Sebastian, Elena Olivarez of Santa Rosa and San Juana Flores and husband Pedro of Santa Rosa.