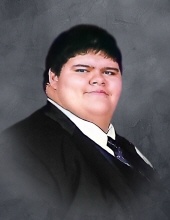 Isaiah Isaac “Bubba” Valdonado was born in Lubbock, Texas on November 26, 1995, to Isaac and Mary Valdonado. He graduated from Brownfield High school in 2014 where he was involved with band and football. His fellow teammates knew him as “Big I.” He graduated from South Plains College in 2017 with an Associate’s Degree in Graphic Design. After college he was employed by Our Promise Youth Academy in Brownfield. During his employment he touched the lives of many children along with the people that he worked with. Isaiah had a passion for making the children of the youth academy feel encouraged and loved.

Isaiah was an avid gamer and enjoyed playing online with his friends and fellow gamers. Growing up, Isaiah found his love for animals with his three dogs Oreo, Cookie, and Petra and two cats Peanut and Lexi. Isaiah was a simple person and could normally be found gaming at home or on a rare occasion out with his close friends. Isaiah was a devoted catholic and had received all of his sacraments.

He will be deeply missed by his family, friends, and all who knew him.