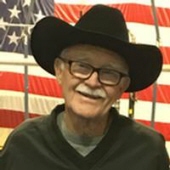 There will be a family visitation from 5pm to 7pm on Friday, April 1, 2016 at Brownfield Funeral Home.

Jackie Van Cargill was born in Brownfield, TX on August 25, 1936. He moved to Seminole at the age of nine and graduated from Seminole High School in 1954. While in school he was student body president, Who’s Who, football captain, and best all around. After high school, he attended Le Tourneau Tech in Longview, and Texas Tech University in Lubbock.

He married his high school sweetheart, Katie Joann Webb, on August 31, 1957. They moved to Brownfield in 1960 where he worked for Foremost Dairies before going into the insurance business. He later became a Certified Life Underwriter and purchased his own agency. He owned and operated Cargill & Thames Insurance for 32 years.

Jack always had a passion for city government and had a special love for Brownfield. He was appointed Council-member in July 1981 and served as Mayor from 1988-1992.

In 1994, he sold his insurance agency and took the job as the City of Brownfield Economic Development Director until his retirement in December of 2011.

While he loved fishing and spending time with his family, or enthralled in a Louis L’amour western novel, his commitment to Brownfield drew him back to the council, where he was appointed Councilman again in 2014.

He was a proud member of the First Baptist Church of Brownfield where he served as Deacon, was a part of the adult choir, and served on various committees.

Jack was also an active member in the Optimist Club where he was past president and active in the Babe Ruth baseball league.

He served on the Caprock Business Finance Corporation from 1995-2016 where the board help provide funding for startup businesses in the South Plains.

The family suggests memorials be made to the Brownfield First Baptist Church building fund.