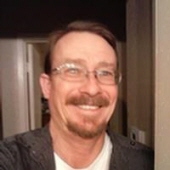 Services for James Lynn Rex will be held at 10 am Saturday, August 20, 2016 at Calvary Baptist Church in Brownfield with Rev. Steve Carter officiating. Burial will follow at Terry County Memorial under the direction of Brownfield Funeral Home.

There will be a family visitation from 6pm to 8pm Friday, August 19, 2016 at Brownfield Funeral Home.

James was called to his eternal resting place on Friday morning, August 12, 2016 in his home. James was born to Jimmy Lynn and Yvonne Rex on September 4, 1963 in Brownfield,Texas. James graduated from Wellman High and attended South Plains College. He worked as a water meter and customer service technician for the City of Lubbock. James was engaged to be married to his best friend, Billie Gibbs of Lubbock. He was a member of the Calvary Baptist Church. He was a loving father, grandfather, brother and uncle.

James was preceded in death by his parents, Jimmy Lynn and Yvonne Rex.

Donations may be made to the American Diabetes Association or the Muscular Sclerosis Association.