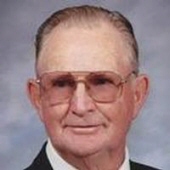 Services for James R. Burnett will be held at 2pm Saturday, April 26, 2014 at Brownfield Church of Christ with Bob Reynolds and Bo Shero officiating. Burial will follow at the Brownfield Cemetery with U.S. Navy Military Honor Guard, under the direction of Brownfield Funeral Home.
Visitation will be held on Friday, April 25, 2014 from 5-7pm at Brownfield Funeral Home.
James R. Burnett "Paw Paw" beloved Husband, Father, Grandfather and Great Grandfather and Great-Great Grandfather finished his last active tour of duty and set sail to unchartered waters to be with his true Commander and Chief our Lord on April 24, 2014.
Paw Paws life was as colorful and unpredictable as he was. James was the seventh child of Jim and Lucy (Knox) Burnett. He graduated Brownfield High School in 1936 and attended college at Abilene Christian College on a full track scholarship, he was preparing for the 1940 Olympics in Sidney, Australia, when the Olympics were cancelled due to the beginning of World War II. While in school at ACC, he met and married the love of his life (his first mate) Virginia Roy. After graduating from ACC he became a football and track coach and teacher at Burkburnett High School. He then became the Physical Director of the YMCA in Palestine, Texas. In the summer of 1942, James enlisted in the Navy as a Chief Petty Officer and served until 1945. He was a World War II Navy Veteran, serving in the South Pacific he received the World War II Victory medal, the American Defense medal, the American campaign metal, the Asiatic Pacific campaign medal, the Combat Action ribbon, and a Honorable discharge Navy button (Ruptured Duck). Shortly after his Honorable Discharge, he purchased 40 acres of land west of Brownfield on which he and Virginia lived and ran the Brownfield Dairy. He was also an active member of the American Legion and the Veterans of Foreign Wars. Never one to balk at hard work, James returned to teaching at Brownfield Middle School where he once graduated High School 9 years before. He coached football and track, he formed the first all girls football team called the Gravel Gerties (a.k.a. powder puff football) while running the dairy. After 23 years he retired from teaching, he worked for the Soil Conservation for 15 years. James was a faithful, humble servant of God and active member of Brownfield Church of Christ, where he was the oldest male member, he was a member of the Senior Saints, he taught Sunday school for a number of years and was a teacher for World Bible School program, he took an active part in "Thursday School" for 25 and a half years, he was known as "Paw Paw" by many generations of children. In his life he built a legacy of everlasting love and dedication to his Faith, his family and friends, and his Country. James was a member of Brownfields first Boy Scout Troop.
James was preceded in death by his wife Virginia, of 69 years and 11 months, six siblings and one great- granddaughter Alexis Burnett. Those left to remember him include his son Horace Burnett and wife Roxanne, of Amarillo, his daughter Judy and her husband Bill Edgar of Brownfield, and his son Gary Burnett and wife Sandy of Ft. Worth, TX. James will also be lovingly remembered by his grandchildren, Tracy and husband Mark Smothermon of Amarillo, Jade and husband Jeff Sieradzki of Kent, Washington and Robert Burnett and wife Miquela of Combine, TX. Carl Edgar and his wife Melissa of Brownfield, Paul Edgar and his wife Jennifer of San Antonio. Jason Burnett and his wife Colleen of Austin, TX. Great grandchildren include, Ashton Burnett, Adison and Elijah Smothermon, Christian, Caileigh and Maxwell Burnett, Lucius Sieradzki, Makayla Kinney and Trinity Mitchell and Jillian and William Edgar and Justin and Rylie Burnett, and one great-great granddaughter Marley.
James always had a quick smile, a silly joke and warm hug to share. He was kind to everyone no matter how young or old. He will be greatly missed.
To those who would like to honor James memory, donations can be made to Thursday school at the Brownfield Church of Christ, 502 Lubbock Rd. Brownfield, TX 79316