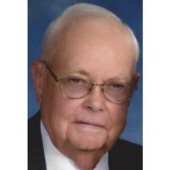 Service for James Lowell Willis will be at 3pm Saturday, September 19, 2015 at Brownfield Church of Christ with Bo Shero and Bob Reynolds officiating. Burial will follow in the Terry County Memorial Cemetery under the direction of Brownfield Funeral Home.

Visitation will be held from 1 to 2:30pm at the Brownfield Church of Christ.

James was born to the late Carl and Ethel Willis in Paducah, Texas moving to Terry County with his parents in 1945. He graduated from Wellman High School as Valedictorian of his class. He married his high school sweetheart Charlsie Du Bose in Brownfield. They made their home and farmed in Terry County until 1984, when he began another business, Sandblasting and Painting Service and later worked for Brownfield ISD Transportation Department and later he worked for Texas Boll Weevil program and Tri- Matic Irrigation.

He was a member of Brownfield Church of Christ for many years. Most of all James loved God, family and friends. He was active in the community, serving as director for the Brownfield CO-OP Gin, Terry County Farm Bureau, and Growers Seed Association and was active in Terry County Livestock Show, holding numerous positions in that organization for 14 years. When his children were growing up James volunteered much of his time to the local 4-H and Future Farmers of America Chapters in Wellman. From Farm Skills and stock shows, he took a vested interest in supporting his children and youth groups. James will also be remembered for his keen sense of humor.

James is preceded in death by his parents and a great grandchild Ellie Grace Jeffers.

James is survived by his wife Charlsie Willis; 2 children, Carla Willis Reese and her husband Rocky and James Mark Willis and his wife Cindy. He loved and was proud of each of his beloved grandchildren, Christi Reese Jeffers, Kyle Reese, Taylor Willis, Logan Willis and Levi Davis

Donations may be made to a Charity of your choice.