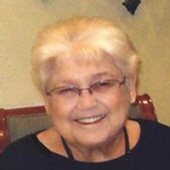 She was born in her parents’ home in Montague County, TX, near Bowie, on May 24, 1935, to her mother, Myrtle Jane Brown, and father, R.A. “Pat” Patterson. Growing up, she attended many schools around Texas but always stayed focused and dedicated to her education. This allowed her to graduate from high school a year early from Plains TX, in 1952. She went on to obtain her cosmetology license in 1953, which she practiced for many years. She married the love of her life, C.E. “Buddy” Brantley, on March 14, 1953.

Janelle was such a blessing to so many during her time in this world. One thing remained constant throughout her life, and that was her love for Jesus Christ. She stood firm on her belief and He was always at the forefront of every decision or plan she made. She also had many passions, talents and hobbies while establishing her amazing legacy. She loved teaching Sunday school and being involved with her church family. Some of her many hobbies included painting and writing. She participated in numerous groups and organizations in Yoakum County. The last few years she was trying to compile many of her life memories in paper form to share with her friends and family. However, the most precious thing in her life was her family. She was so proud of each and every one of “her kids”. This included her own children, grandchildren and great-grandchildren. But it also included many others that she called her own. She boasted and gloated on every little thing they accomplished and would make sure that everyone knew how amazing they were. She always encouraged and prayed for everyone in her life.

She was preceded in death by her loving husband, Buddy Brantley and her youngest son, Randell “Randy” Brantley, her parents, and her sister, Mylonne Gates. She is survived by her son Richard “Richey” Brantley and his wife Lea of Midland, TX, Rhonda Cox and her husband Lynn of Wolfforth, TX, and Susie Brantley of Bedford, TX, sister, Terry Price of Boerne, TX and brother, Robert Patterson of Helotes, TX. Her grandchildren, Rory Brantley and wife Dawnna, Ryan Brantley, Sarah Batson and husband Ben, Justin Brantley and wife Laura, Laura Stephens and husband Derek, and Kyle Brantley. She also leaves behind seven great grand children, whom she cherished, and numerous nieces and nephews.

The family requests that memorials be made to First Baptist Church of Plains.