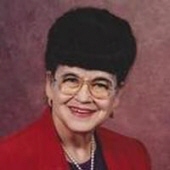 Services for Janelle Evans, 86, of Brownfield will be at 10am Thursday, July 10, 2014 at the Terry County Memorial Cemetery with Rev. Chris Seaton officiating.

There will be a family visitation at Brownfield Funeral Home Wednesday, July 9, 2014 from 5pm to 7pm.

Janelle was born to L.O. and Leona Carrie Turner October 16, 1927 in Bowie. She graduated from Brownfield High School and then Wayland Baptist University with a degree in psychology. Janelle married Amy Evans in Brownfield on July 28, 1950. She was a member and Sunday school teacher at the First Baptist Church. Janelle was a candidate for the Harvest Festival Queen in the 1950’s and last year was in the Terry County Parade. Janelle and her husband, Amy, were very political and instrumental in starting the Republican Party in Terry County. She was preceded in death by her husband, Amy Evans in 2003.

Donations may be made to Brownfield First Baptist Church or the National Parkinson's Foundation.