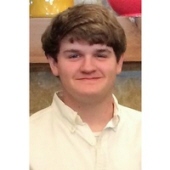 Jarod Burton Foshee, 19, of Caneyville, Ky. was born on November 16, 1997 to Burton Scott Foshee and Amber Camille Foshee in Lubbock, TX. He died on August 23, 2017. Jarod lived in Brownfield until 2008 when he moved to Lubbock. He attended school in Brownfield and at Cooper in Lubbock.
Jarod excelled in football and baseball. He worked alongside his father on the family farm and at the spraying service. Jarod moved to Caneyville, Ky. in March 2017 where he enjoyed nature and trail riding. He was loved by all of his friends.
Jarod is survived by his mother, Amber Foshee of Caneyville, Ky; his father, Scott Foshee and wife Debbi of Brownfield; brother, Matt Foshee and wife Amanda and nephew Lincoln of Cypress; grandparents, Linda Foshee, Patsy Fulford and Larry Fulford all of Brownfield; several aunts, uncles, cousins and his beloved pets, Quigly, Magnum, Maggie and Jackie.
He was preceded in death by his grandfather, Joe Foshee, and his uncle Cliff Foshee.
Viewing will begin at 2 pm on Sunday, August 27, at Brownfield Funeral Home. Family visitation will be Sunday from 3 pm until 4:45 pm at the Family Life Center across the street from the Brownfield Church of Christ. A private service will be held later for family only.