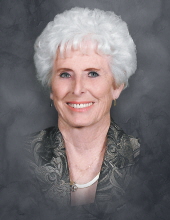 Jayne Jobe Rackley, 91, of Brownfield, TX, went to be with her Lord and Savior on December 12, 2019. The family will host a time of fellowship and remembrance from 6:00 pm to 8:00 pm on Sunday, December 15, 2019, at Brownfield Funeral Home. Graveside services will be held in the Terry County Memorial Cemetery at 11:00 am on Monday, December 16, 2019, followed by a Celebration of Life service at First Baptist Church in Brownfield at 1:00 pm. Dr. Matt Baird will officiate, assisted by the Reverend Steve Carter. Music will be under the direction of Terry Ewing.

Forrest Jayne Jobe was born in Terry County, Texas on December 10, 1928 to Vallie (V.O.) and Essie Johnson Jobe. At the age of 13, she accepted Jesus Christ as her Savior and was baptized at First Baptist Church in Brownfield where she was a lifelong member. She was an active member of Sunday School, Sunday night Training Union, Girl’s Auxiliary bible study and the church choir for many years. Jayne graduated from Brownfield High School in 1946. She was a member of Beta Sigma Phi Sorority for many years. She was employed by Shell Pipeline for 8 years and Goodpasture Grain and Fertilizer for 37 years retiring at the age of 63.
She met the love of her life, Sonny Rackley, in 1962. The two married on September 24, 1966 in the pastor’s study of the late Reverend Ed Crow of First Baptist Church of Brownfield. Jayne loved her church, doing crossword puzzles, and helping Sonny raise tomatoes. They raised more than they could eat themselves and enjoyed giving away their homegrown tomatoes to others, especially those in assisted living, the senior citizens center, church, neighbors, friends and family. Sonny and Jayne had a special relationship and spent little time apart. They enjoyed time spent together and truly made the statement “better together” a reality. She was an avid Brownfield Cubs and Lady Cubs sports fan and always supported Texas Tech.

Pallbearers will be her nephews and great nephews.