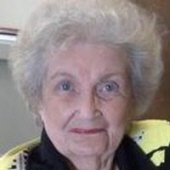 Services for Jean Bielss, 82, of Lubbock will be at 1pm, Saturday, March 1, 2014 at Brownfield First Baptist Chapel in Brownfield with Pastor Jim Scott officiating. Burial will be in Levelland Municipal Cemetery in Levelland under the direction of Brownfield Funeral Home.

There will be a family visitation at Brownfield Funeral Home on Friday, Feb. 28th from 6-8pm.

Jean passed away Thursday, February 27, 2014 in Lubbock. She was born on May 14, 1931 in Levelland, Texas to Jake and Gladys Youngblood. She attended Levelland schools. She was a photographer with Shugarts for many years. She was an avid bridge player and bowler. Jean married Vernon Bielss on July 21, 1950 in Levelland. He preceded her in death several years ago. She was a member of Eastern Star and First Baptist Church. She is also preceded in death by a daughter, Loretta Proctor; a brother, James Youngblood; a sister, Blanche Hill.