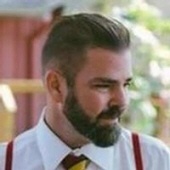 A Celebration of Life Service will be held for Jeremiah James Martin, 41, of Austin on Friday, December 4, 2015 at 2:00 pm at Brownfield Funeral Home Memorial Chapel, Brownfield, Texas. Online condolences may be left at www.brownfieldfuneralhome.com.

Jeremiah passed away Thursday, November 26, 2015 in Austin, Texas. He was born October 31, 1974 in Brownfield, Texas to Sherri Pippin Hatfield and Max Martin.

Jeremiah was generous with his love and his time. He was a champion of charity organization and brought to Austin the Capital City Rockers vs. Mods charity which benefited Austin Pet’s Alive. Two Jeremiah Martin Memorial Rides will be held in his honor: one in Austin on December 6 and one in Houston on December 9. More information may be found on his Facebook page. Jeremiah also took part in the Distinguished Gentleman’s Ride which benefited prostate cancer research and BACA (Bikers Against Child Abuse).

Jeremiah was preceded in death by grandparents, Ormal Alfred and Lecie Elizabeth Pippin of Tokio, and James and Jewel Martin of Brownfield; and an uncle, Johnny Pippin of Lubbock; and a cousin, Sid Tom Pippin of Lubbock.

In lieu of flowers, the family requests that donations be directed to Austin Pet’s Alive, any child abuse charity or the charity of your choice in Jeremiah’s honor.