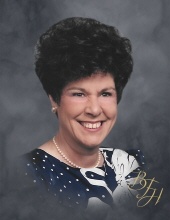 There will be a family visitation from 6 pm to 8 pm on Friday, February 18, 2022, at the Brownfield Funeral Home.

Jessie passed away on February 10, 2022, in Lubbock TX. She was born in Knox City, TX. on January 4, 1938, to Arthur Dee and Ethel Estelle Hawley Hollingsworth of Rochester TX. She was born the 9th of 10 children and was raised on a farm near the main fork of the Brazos River. She described her childhood home as the best place in the world for a child to be raised.

She met Jack Allen Webb in Rochester, TX. in 1954 and they were married on May 13, 1955, in Benjamin, TX. They were blessed with 3 children, Lynette, Brenda and Allen. In 1965, they moved to Terry County where they farmed and raised children over the next 30 years. She enjoyed talking about another birthday that was so close to her heart, she received Jesus Christ as her personal Savior in 1967 and her life was never the same! She enjoyed going to Church where she built lifelong friendships and served in many capacities such as Church Mission's director, Elder, President of the Women's Ministry (UFW) and serving her Savior in many other ways. In her day-to-day life, she shared her faith in Jesus Christ and led many to the Lord. From the heartache and hurt in her own life she ministered to the hurting and broken-hearted people that crossed her path. Jessie owned and operated a re-sale store where she was able to touch many, many lives of women who were hurting and struggling. She prayed for them, encouraged them, provided clothing to them and their children and shared the saving grace of Jesus Christ. She was a caregiver for many years to people with Alzheimer/dementia and deeply loved and cared for each one. She was a prayer warrior and loved to read and study her favorite book, the Bible. Jessie loved to cook, decorate her home, and take care of her family.

When she arrived in heaven, she was greeted by Her Savior, her brothers Sharky, Jack, Wimpie, Tunny, Jimmy T, her sisters Vivien and Dorothy along with her Mom and Dad. She is survived by her daughter Jackie Lynette Webb Davis of Brownfield, daughter Brenda and Terry Barrier of Cleburne, son Allen and Christie Webb of Lubbock. She is also survived by 7 grandchildren, BJ and Shana Sisson of Brownfield, Josh and Heather Sisson of Panama City, FL, Tiffany and Jeff Proctor of Snyder, Jared and Jessica Barrier of Clinton, NC, Jessica and Chris Burkhardt of Petronilla, TX, Christopher Webb of Midland, and Tyler and Chelsea Webb of Odessa. She is also survived by one brother, David and his wife Alice Hollingsworth of Rochester, and one sister Etta Mae Brazell of San Antonio, and 9 great-grandchildren, plus lots of nieces, nephews, cousins, and friends.