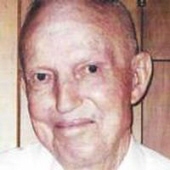 Services for Jewel Kelcie Copeland, 88, of Brownfield will be held 2:30 pm Saturday, September 27, 2014 at the West Tate Church of Christ, with Ernest Smith officiating. Burial will follow in the Terry County Memorial Cemetery, under the direction of Brownfield Funeral Home.

There will be a family visitation at Brownfield Funeral Home on Friday, September 26, 2014 from 6 pm to 8 pm.

Jewel Kelcie Copeland was born November 28, 1925 in Pickens, OK, to Freddie Clayton Copeland and Effie Charlotte Williams. He passed away on September 20, 2014, in Lubbock. When he was a teenager, Jewel and his family moved to Scottsdale, AZ, where he married Ruby Eulalia Ware on June 1, 1959. They moved to Phoenix in 1969 and lived there for 39 years, where he was an elder at the Black Canyon Church of Christ, and then they moved to Brownfield in 2005. Jewel was a member of the West Tate Church of Christ. He is preceded in death by his parents, Freddie Clayton and Effie Charlotte Copeland, two sisters Bonnie Copeland and Beatrice Ramsey, and a brother, Shelby Copeland.

In Lieu of flowers family requests donations be made to West Tate Church of Christ in his memory.