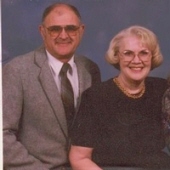 Services for Jimmie Dale Rodgers will be held at 10 am Saturday, November 17, 2018, at Brownfield Church of Christ with Bob Reynolds and Bo Shero officiating. Burial will follow in the Meadow Cemetery under the direction of Brownfield Funeral Home. And as he requested multiple times over the years, he will be buried with his boots on!

Jimmie passed away Sunday, November 11, 2018, in Brownfield. He was born on June 1, 1933, to Tommie and Nellie Rodgers in Coffeeville, MS. Jimmie graduated from Meadow High School in 1950. Jimmie met the love of his life, Doris Elaine Rodgers, on the "drag" in Brownfield and married her on December 22, 1951. He was drafted into the Army in 1953, sending him and Elaine to Georgia and then the Panama Canal Zone. After his service in the Army, he returned to work at Teague, Jack Baileys, and then Paul Jones Chevrolet until they closed their doors. Jimmie and J.C. Jennings started Downtown Auto Service in 1969. He was also Fire Marshal of Terry County and an Auto Diesel Tech Instructor for South Plains College.
In 1990 when the state began to require that all instructors have a degree in order to teach college courses, Jimmie began taking courses to obtain a degree. He attended classes at SPC before, in between, and after his scheduled teaching classes. He not only attended courses at South Plains College, but also at Texas Tech University, Texas A&M University and took extension courses at Midland College, Howard College in Big Spring. He remembers sometimes walking in the house after 1 am and waking back up at 4 am the next day to begin another day. After 4 years of taking college courses, he earned 2 Associates degrees - one in Law Enforcement and one earning him a Peace Officer License in 1992 and one in Auto Technology. He continued to teach and work all of the other jobs until his retirement with SPC in 1995. Jimmie was Commander of the American Legion Post 269, a volunteer fireman, a member of the Lions Club, and a Boy Scout leader. He also taught Sunday School at the Church of Christ and was a faithful member. Jimmie is preceded in death by his parents, Tommie and Nellie Rodgers; his wife Elaine Rodgers; and a granddaughter Shannon Ryan.
Jimmie is survived by three children, Sherry Rodgers of Lubbock, Kenneth Rodgers of Brownfield, Tracy Rodgers and wife Lisa, of Levelland; nine grandchildren, Laura Freeman of Missouri, Craig Graves of Idaho, Stacia Ryan of Brownfield, Heather Crawford of Lubbock, Kari Anderberg of Minnesota, Kassi Rodgers of Brownfield, Shauna Rodgers of Alabama, Carly Rodgers of Lubbock, Misty Day of Seminole; and 27 great-grandchildren.
Special thanks to Hospice of the South Plains, Mindy Clark, Elouise Hartfield, Pastor David Ladines, Dr. Howard Hurd, Dr. Shane Hord, UMC, Brownfield Hospital and the list of his friends which is just too long to list.