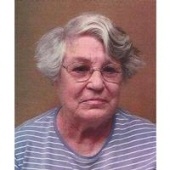 Visitation will be held from 4-6pm Sunday, August 30, 2015 at Brownfield Funeral Home.

JoAnn died Friday night at the age of 80 at her home in Lubbock from advanced kidney disease. She was born on December 4, 1934 in Lamesa, Texas and was the daughter of Robert Clifford and Lucille Zant. JoAnn was married to Air Force Lt. Colonel Joseph Gene Ridgway on September 4, 1953. He preceded her in death on October 19, 2012. She actively supported her husband’s military career with volunteer work; she was a dental assistant for over twenty years, a civil air patrol commander and licensed pilot.

JoAnn was also active in the Lion’s Club and in her later years managed the business of affairs of her parent’s Zant Family Farm in Brownfield. Her hobbies included crocheting, sewing, cooking and collecting western art.