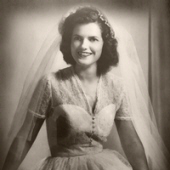 Services for JoAnne Johnson, 87 of San Antonio will be held at 2 pm May 10, 2019, at Brownfield First Baptist Church Chapel, conducted by Jerry Joplin. JoAnne passed away May 4, 2019, with her husband, son and her grandchildren gathered around her.

JoAnne was born November 12, 1931, in Deport, Texas to Grady and Annie Mae Dickson. They moved to Brownfield in 1942 where she lived until she graduated as Valedictorian from Brownfield High School in 1949. There she met Carrol Johnson, and they "liked" each other beginning in the eighth grade. They started dating in high school and neither ever had a date with anyone else. They both attended Baylor University and married after their Sophomore year July 14, 1951, 68 years ago. JoAnne never wanted to do anything but be a godly woman and Mrs. Carrol Johnson. She taught elementary school for a few years, but her home, family and her church were her main loves. She was well known as a very gracious hostess for family and many groups of people.

JoAnne followed Carrol everywhere she could as he served as a Chaplin in the Air Force. The only time they were separated was when he served in Vietnam.

Survivors include her husband Carrol, son Dan and wife Kathy of San Antonio, son Steve, of Aurora, Colorado as well as seven grandchildren, Wood/Tiffany, Britton/Lauren, Steve/Deena, Carinette, Zoe, Sheldon and Katlyn Johnson as well as three great-grandchildren, Issac, Grady, and Murphy Johnson. She is also survived by several nieces, nephews and their children whom she loved dearly; also sister Janie/Merlin Speed of Lubbock and brother-in-law, I.B. Johnson of Denver, Colorado. She was preceded in death by her parents and an infant daughter, Sarah Elizabeth.

Contributions may be made to Brownfield First Baptist Church, in lieu of flowers, if you choose.