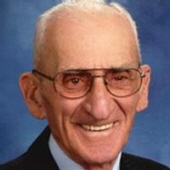 Visitation will be held from 5-7pm on Wednesday, July 29, 2015 at Brownfield Funeral Home.

J.V. was born in Morton to Ellis Vaughan and Mattie Imo Riley on January 25, 1928. He graduated from Brownfield High School in 1946. J.V. married Ellen Louise Davis on May 18, 1946 in Lubbock. He began farming in 1947. He served in the U.S. Navy from 1953 to 1956. He was a member of Brownfield First Baptist Church, Odd Fellow Lodge, as well as a board member of Terry County COOP Gin, Lonestar State Bank and Terry County Memorial Hospital. He is preceded in death by his wife, Ellen Louise Riley; parents, Ellis Vaughan and Mattie Imo Riley; sister, Leota Hinson and two brothers, Vaughn Riley and Velton Riley.