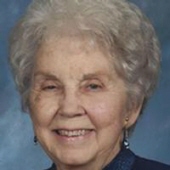 Joy was born June 23, 1923 to Monta and Ione Simpson in Post. She moved to the Union Community in 1929. Joy graduated from Union High School in 1940 and then Draughns Business College in Lubbock. She married her childhood sweetheart, Cletus Floyd, on July 26, 1942 in Brownfield. A month after they were married Cletus was called to serve in the US Army Air Corp and during the first 2 years of his military career they traveled to military bases all across the United States. Then she anxiously awaited his return from a 2 year overseas deployment. As soon as Cletus returned home they started growing their family and farming life.

She was a long time member of the Union Baptist Church where she was active in the mission organization, taught Sunday school, and VBS. She later became a member of Brownfield First Baptist. Joy was a lifelong member of the Terry County Extension Homemakers. She attended state conventions as a voting delegate, a leader in the 4 H clubs, a talented artist and member of the Brownfield Art Association. Joy passed away at her home on Sunday, April 12, 2015. She is preceded in death by her parents, Monta and Ione Simpson, husband of 72 years, Cletus Floyd, grandsons, Colton Lee and Casey Lane Burran.

In lieu of flowers the family requests donations to the First Baptist Church Building Fund or make donations to Terry County Memorial Cemetery.