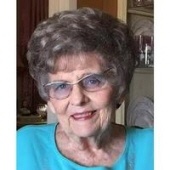 Joyce Clanahan Bearden was born August 15, 1932 in Yoakum County. She was a lifelong resident of Yoakum County and lived east of Plains, near her current home, her entire life. She went home to be with her Lord and Savior and her beloved Ray on Tuesday, February 7, 2017.

There will be a family visitation held Thursday, February 9, 2017 from 6 pm to 8 pm at Brownfield Funeral Home.

Services will be Friday, February 10, 2017 at First Baptist Church Plains at 1:30 pm, officiated by Patrick Hamilton and Tracy Bearden. Burial will be at 4:00 pm in Terry County Memorial Cemetery. Donations can be made to Buckner Children’s Home or to the Alzheimer’s Association.

Joyce was born to Noel, Sr. and Opal Clanahan. She graduated from Plains High School as part of the Class of 1949. She married the love of her life, Ray Bearden, on June 26, 1949 at First Baptist Church Plains. They built a strong Christian home and lovingly adopted their two children, Rickey and Rhonda. Joyce was Ray’s life mate and assistant as they farmed in the Tokio community for 39 years. She was an active member of Tokio Baptist Church until it disbanded in 1995. She later joined First Baptist Church Plains where she was a devoted member of the Fidelis Sunday School Class.

Joyce never missed a chance to spend time with friends and family. Whether it was sitting and chatting with lifelong friends, or playing games with extended families, or following kids, grandkids and great-grandkids across the country to support them in their various endeavors.

The family would also like to express their deepest appreciation for the years of loving care and support they received from Home Instead caregivers, and especially from Delia Alaniz for being a beloved caregiver and friend to Mom & Dad.