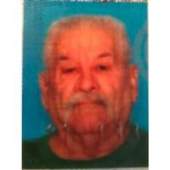 Funeral services for Juan De Dios Zamora, Jr. will be held at 10 am Wednesday, January 11, 2017 at St. Anthony’s Catholic Church with Father Eduardo Teo officiating. Burial will follow in the Brownfield Cemetery under the direction of Brownfield Funeral Home.

A rosary will be held at 6pm Tuesday, January 10, 2017 at Brownfield Funeral Home with a memorial service following at 7pm.

Juan was born November 1, 1933 in Goliad to Juan De Dios Zamora, Sr and Estella Garcia Garza. He married Dora Salinas on December 5, 1952 in Alice, TX. Juan and his wife were early settlers of Terry County. They moved to Brownfield in 1954. Juan was a big Texas Rangers fan and an even bigger Dallas Cowboys fan. He is preceded in death by his parents, Juan De Dios Sr. and Estella Zamora, step mother, Adelina Zamora and sister, Dalia Zamora.