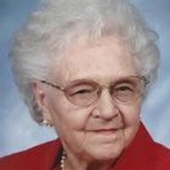 Visitation will be held from 3-5pm Sunday, November 30, 2014 at Brownfield Funeral Home.

Juanita passed away on November 27, 2014 in Brownfield. She was born on March 9, 1919 in Erath County to Homer and Llala Duncan. Juanita was a member of First Baptist Church since 1972 and the VFW Ladies Auxiliary. She worked for GTE for 27 years in Matador, Littlefield and as a manager in Dalhart and Brownfield.

Juanita is survived by her 2 sons, Jimmy Martin of Amarillo and Kenny Sharp of Lubbock; 2 daughters, Anita Curry of Albuquerque, NM and Jean Bailey of Lubbock; 15 grandchildren; numerous great grandchildren and 2 sisters, Audrey Faye Powers and Betty Duncan both of San Antonio.