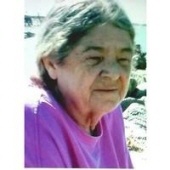 Judy passed away July 11, 2016 in Brownfield. She was born September 12, 1954 in Spur to J.P. and Johnnie Wright. She attended Brownfield Schools. She married John Mathis December 28, 1971 in Brownfield. Judy was an amazing woman, mother, and grandmother. She is preceded in death by her parents, two sisters, and a brother.