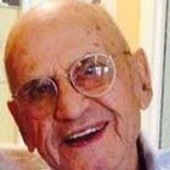 Kenneth Paul White, passed from this life Friday, July 11, 2014, surrounded by his family who loved and knew him as ‘Papaw’. Kenneth was born May 1, 1933 to J.L. and Idella (Jones) White in Meadow, Texas. They relocated to Pyote where after graduation from High School he enlisted in the Army, volunteering to go to Korea in 1951. He was sent instead to operate heavy equipment and assist in post WWII clean up efforts in Europe. He brought back a British bride, Barbara Cox, from London and together raised 2 children. They spent time in Odessa, Lubbock, and Alamogordo, NM but were residents of Brownfield for 35 years until 2011 when they moved to Lubbock.

Kenneth worked in the Civil Service, and farmed but was most remembered as Street Superintendent for the City of Brownfield.

Preceding him in death are his parents and sister, Alice Thetford.

In Lieu of flowers, family suggests memorials be made to the Alzheimer’s Association.