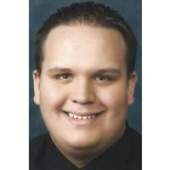 Services for Kevin Mark Nance, 27, of Brownfield will be held at 2pm Wednesday, October 28, 2015 at Brownfield First Baptist Church Chapel with Rev. Matt Baird officiating. Burial will follow at the Terry County Memorial Cemetery under the direction of Brownfield Funeral Home.

Visitation will be held from 6-8pm on Tuesday, October 27, 2015 at Brownfield Funeral Home.

Kevin went to be with the Lord on Sunday, October 25, 2015. He was born to Tom and Susan Nance on December 6, 1987 in Lubbock. Kevin graduated 6th in his class from Brownfield High School in 2006. He was a member of the Nation Honor Society and was a 4yr All State tuba player. He attended Texas Tech University. Kevin loved caring for others, especially his mother. He loved animals and had a soft spot in his heart for them. He also loved sports; he was a Texas Tech, Cowboys and Red Sox fan.

Kevin is preceded in death by his grandparents, LaJuan Nance, Elbert Jackson and Myrtle Jackson.