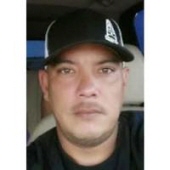 Services for Kevin Wayne Cano, 37, will be held at 10 am Saturday, September 24, 2016, at St. Anthony's Catholic Church with Father Eduardo Teo officiating.

There will be a Rosary held on Friday, September 23, 2016 at Brownfield Funeral Home at 6pm.

Kevin passed away Friday, September 16, 2016. He was born July 5, 1979 in Lubbock. Kevin was raised by his grandparents, Raul and Becky Cano. He attended Abernathy schools. Kevin worked at Needmore Gin for six years and then he worked for Permian Logistics and was a truck driver for the last seven years. He attended St. Anthony's Catholic Church. Kevin was very friendly and easy going. He always had a smile on his face and laughed about everything. He was a great father and husband and was friends with whoever he met.