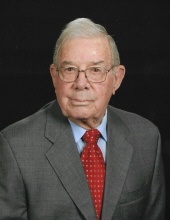 L G was born in 1927 in Brownfield, Texas to Loyd Glover Moore and Alice Elizabeth (Buell) Moore. After graduation from Brownfield High School he attended Texas Tech and then served in the U.S. Army from 1945 to 1947. He worked as a carpenter and letter carrier for the United States Postal Service, retiring in 1992. He taught each of his children the value of God, family, honesty and hard work by his example.

L G and Lois June Stevens met at the first Harvest Festival in Terry County in 1947. They were married on August 17, 1949 and celebrated 70 years of marriage last year. He loved her dearly and in recent years cared for her, always reluctant to leave her side, until his passing.

L G is survived by his wife Lois, sons Gary Moore (Linda) of Amarillo, Greg Moore (Niel) of Lubbock, Kelly Moore (Kathy) of Lubbock, his daughter Shay Troutman (Jon) of Lubbock and by his sister Mary Lackey. The lights of his life were his 8 grandchildren (Allison, Landon, Evan, Eryn, Mollie, Kent, Aleigha and Alexa) and 8 great-grandchildren. He was preceded in death by his parents, by his brothers Billie and Erwin, and his sister Linda Hawkins.

In lieu of flowers, his family suggests memorials to the First Baptist Church of Brownfield, Alzheimer’s Association (www.alz.org) or to your favorite charity.