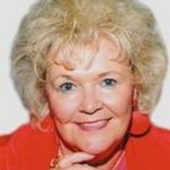 A Celebration of Life service for Laquita Joan Webb, 75, of Levelland, will be held at 2pm, Saturday, May 10, 2014 at the First Presbyterian Church E.P.C, 1204 8th Street in Levelland. A reception will follow the service in the family life center at the church. This will be a time of fellowship with the family, listen to live music and celebrate the life of Laquita.

Laquita went to be with the Lord on May 2, 2014 at her home in Levelland. She was surrounded by the people she loved. Laquita Joan Adams was born in Mountain Park, Oklahoma on March 9, 1939 to Garland and Nelly Adams. She moved to Levelland in 1948 and attended Levelland Schools, where she was a part of the class of 1957. She married Donnie Hugh Webb on June 12, 1954 in Portales, New Mexico. Laquita was a member of numerous groups and organizations. In recent years she was on the Board of Directors for Levelland Senior Citizens Center and was a member of two bridge clubs. She was a member of the First Presbyterian Church E.P.C. of Levelland. Laquita was preceded in death by and infant sister, Jacquelyn Adams and her father, Garland Wayne Adams.

Laquita was deeply loved by her family and friends. She will be greatly missed.

In lieu of flowers, please give to a charity of your choosing.