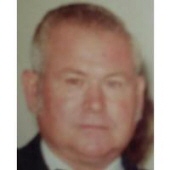 Larry Carl McCullough, 77 of Brownfield, TX. went to be with the Lord on December 1, 2015 after a lengthy illness. Larry was born September 17, 1938 in the home of his Aunt Pearl in Slaton, TX. Larry was the oldest of six children born to Lonnie C. McCullough and Annie (JoAnn) E. Brasfield McCullough. He was preceded in death by his parents and brother, Roy F. McCullough.

Larry joined the United States Air force in 1956 at the age of 18 and continued until he retired in 1977. Larry’s Years of service took him to places like Greenland, Iceland, Thailand, Japan and also included a tour of duty in Vietnam from 1964 to 1965.

A memorial service will be held from 1 pm to 3 pm Saturday, December 12, 2015 at Brownfield Funeral Home.