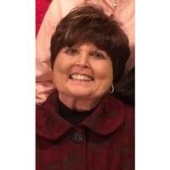 Funeral services for Lela Parks Warren, 72 of Plains, Texas will be held at 2 pm Tuesday, July 19, 2016 at the Plains High School Auditorium with Plains Methodist Pastor Wesley Holland officiating. He will be assisted by Gene Hudgins, pastor of Pleasant Valley United Methodist Church in Amarillo, and Randy Warren, retired Methodist minister and family member. Private family burial will take place in Yoakum County Plains Cemetery under the direction of the Brownfield Funeral Home. Visitation will be held Monday, July 18 from 5:00 to 7:00 at the funeral home, and viewing at the auditorium prior to the service. Lela entered into eternal life on July 15, 2016 in Lubbock surrounded by her loving family.

During WWII, the Parks family relocated to the east coast from Parker County, TX, and there Lela was born May 22, 1944 in Portsmouth, VA, to Henry Neil Parks and Mary Lou Wolfenberger Parks, both pioneering families in Parker County. After the War, the family returned to Parker County and then moved to Plains in 1953. She married James William (Jim) Warren, Jr., of Plains, September 29, 1960.

Lela attended Plains schools, and graduated from Texas Tech University with a degree in English which launched a 38 year teaching career, serving the Texas school districts of Plains, Lamesa, Lockney, Sudan and Mount Pleasant. She taught English, reading, writing, literature, speech, and she enjoyed the Shakespearian collaborations as well as the Lincoln-Douglas debates. Her UIL teams took district honors routinely, and she oversaw the Gifted and Talented Program at Plains High during her tenure. Throughout her career, she oversaw class sponsorship, student council, cheerleading, drill team and yearbook. The “Lela Warren Citizenship Award” is presented in her honor annually at Plains ISD. She taught with Christian values, and she touched thousands of lives teaching life’s lessons in the classroom.

Lela was a faithful and humble servant of the Lord. She was a member of the Plains United Methodist Church where she served as she could. She enjoyed traveling, stopping at a good garage sale, antiquing, and spending the summers at Horseshoe Bay. Lela was a lover of reading, and she enjoyed a good mystery novel, as well as the readings of Abraham Lincoln. She passionately followed her grandchildren’s special events, loved Abilene High Eagle and Wimberley Texan High School Football, and was a super fan of Texas Tech Athletics and the WNBA.

She is survived by her husband of 54 years, Jim of the home, three sons, Stephen Michael of Abilene, Russell James of Arlington, and Douglas Neil and wife and daughter in Christ Michelle of Wimberley. One grandson, Stephen James Warren of Abilene, and his mother and daughter in Christ Carol Ann Warren also of Abilene, and two granddaughters, Jordan Michelle Warren of Lubbock and Bailey Tatum Warren of Fort Worth. One brother, Dr. Weldon Parks and wife Carla of Gainesville, and two sisters, Kittie Armstrong and husband Harold of Bossier City, LA, and Janelle Cobb and husband Jack of Plains. Her mother-in-law Margaret Warren of Plains, sisters-in-law Jana Melvin and husband Robert of Vado, NM, Joyce Pierce and husband Joe of Plains, and Jo Willis and husband Ricky of Brownfield, family friend Berta Angelica Hernandez of Plains, and a host of nieces, nephews, cousins, and friends including her “Lunch Bunch” Sally Carthel of Abilene, Sheree Cannon of Floydada, Peggy Hallmark of Lockney, and the late Polly Gilbert.