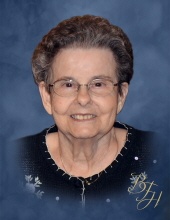 Leona Margaret Henneke Schertz passed away on January 9, 2022, at the age of 91. She was born to parents Leo and Josephine Kuhn Henneke in Cat Springs, Texas on November 15, 1930, and was raised in Bernardo, Texas. Leona was baptized into the Catholic faith in Mentz, Tx. at St. Roch's. She attended school in Bernardo. On November 9, 1948, Leona was joined in marriage to Vincent Schertz at St. Roch's Catholic Church in Mentz, Texas.

Being a devout Catholic, Leona was a member of St. Anthony's Catholic Church for 64 years. She was very involved in the church being a member of the Altar Society. She worked at Meals on Wheels for 30 years upon her retirement. Leona was a devoted wife and mom to her husband and daughters. Her grandchildren and great-grandchildren made her very proud.