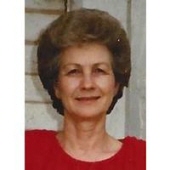 Funeral services for Leota (Lee) Ruth Slaughter will be held at 10 am Friday, February 10, 2017 at Brownfield Church of Christ with Ernest Smith officiating and Jerald Baldwin assisting. Burial will follow in the Terry County Memorial Cemetery under the direction of Brownfield Funeral Home.

Lee passed away Wednesday, February 8, 2017 in Brownfield. She was born in Garza County to Clinton Horace Howell, Sr. and Faye Edna Reno Howell. She attended school in Post. Lee married Leonard Othell Carey on August 12, 1950. He passed away November 11, 1971. She then married Burke Slaughter September, 7, 1979 in Brownfield.

Lee was a homemaker in the greatest sense of the word. She kept a clean home, cooked all meals from scratch, and made all of the clothes for her children. She did work for a time as the Manager for a fabric shop in Brownfield, at Nelson’s Pharmacy and Sears-Copeland Hardware as a sales clerk. The central and most important part of her life was her family. There was nothing more important to her than her family and friends.