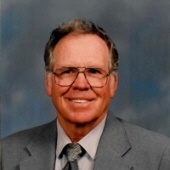 Graveside services for Vandon Leroy Jeter will be held 10am Monday, July 9, 2018 at Terry County Memorial Cemetery with Bob Reynolds officiating.
Leroy was born on March 13, 1930 in Terry County to Winston Willis Jeter and Ruby Lela Jeter. He graduated from Morton High School and then served in the United States Army. Leroy married Betty Richards on January 10, 1973 in Frederiksberg. He moved back to Terry County in 1950 and farmed for 52 years. Leroy was a member of Brownfield Church of Christ. He is preceded in death by his parents, sons, Roy Jeter, Gaylon Richards, grandson, Chris Mullings, Great grandson Alijiah Guerra, and brother, Levon Jeter.
Leroy is survived by his wife, Betty Jeter, of Brownfield; daughters, Kathy Mullings and husband Henry of Brownwood, Sandra Navarro and husband Santos of Brownfield, Valerie Guerra and husband Isaac of Hobbs; sons, Vic Jeter and wife Carylon of Colorado City, John Jeter of Ft. Worth; brother, Eugene Jeter and wife LeNeta of Gilmer; sister, Eva Powell and husband Sam of Burleson; many grandchildren, great grandchildren and one great great grandchild.
In lieu of flowers the family request donations to the Legacy of Love Hospice in Brownfield.