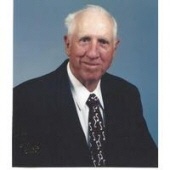 Lewis was born in Terry County to C.W. and Florence Waters on July 12, 1923. He graduated from Brownfield High School and then served in the Army Air Corps where he attained the rank of sergeant. Lewis attended Texas Tech University. He met his wife, Wanda Sue Willson at Calvary Baptist Church in Lubbock and they were married August 9, 1949 in Lubbock. He was a Deacon of First Baptist Church. He also served on the board of directors of the Terry County Farm Bureau, Terry County Coop Gin and South Plains Underground Water Conservation District. Lewis enjoyed watching his grandkids play football, basketball, volleyball, and tennis.

He is preceded in death by his wife, Wanda Sue Waters, parents, C.W. and Florence Waters, daughter, Rebecca Smith, and grandson, Brian Smith.