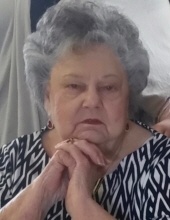 Linda Politte Finley, 86, of Wolfforth, TX went home to be with her Lord and Savior on July 16, 2020. Services will be held at 2:00 pm on Monday, July 20, 2020 at Brownfield Funeral Home Chapel in Brownfield, TX. Interment will follow at Terry County Memorial Cemetery. The family requests that guests wear masks to both the service and the graveside.

Linda was born on January 20, 1934 to Noah Frank and Lottie (Beach) Politte in Big Flat, AR. She grew up in Arkansas and picked cotton alongside her family. It was in the cotton fields that Linda met the love of her life, B.H. “Bullet” Finley. Bullet convinced his niece to go borrow a cup of vinegar from Linda so that he would have an opportunity to meet her. The introduction led to love and Bullet and Linda were married at home on August 28, 1950, in Monette, AR. They had 33 years together before his passing in 1983.

Linda and Bullet moved to Little Rock, then Michigan, and eventually settled in Brownfield. They raised their family in Brownfield and later moved to Wolfforth. Linda is described by her family as the “Queen of Skip-Bo.” She loved the game and taught it to her grandchildren. She was also a good cook and her family will miss her pinto beans, corn bread and gravy. Her cream gravy was so good her brother, Frank, thought she should market it. “Momo,” as she was known by her grandchildren, also loved sewing, singing along with country music and watching birds. She had a great sense of humor and was fun-loving, often the “cut-up” of the family gatherings. She will be remembered for her quirky sayings, such as “Done or raw, due to chaw” - meaning, ready or not, it’s time to eat.

Linda was a member of Immanuel Baptist Church in Brownfield. Her faith in Jesus Christ was very important to her and she passed on that legacy to her children and grandchildren. Linda was preceded in death by her parents, Noah and Lottie, her husband, Bullet; her granddaughter, Stephanie Michelle Anderson; and 5 brothers and 4 sisters.