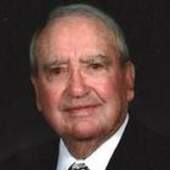 Services for L.J. Richardson, 90, of Brownfield will be held at 11am Saturday, July 19, 2014 at Brownfield First Baptist Goodpasture Chapel with Dr. Carl Moman officiating. A Private burial will follow at 3pm at Terrace Cemetery in Post under the direction of Brownfield Funeral Home.

Visitation will be held after the funeral service on Saturday, July 19, 2014 at Brownfield First Baptist Church Fellowship Hall.

L.J. Richardson passed away on July 16, 2014 after a short battle with cancer. He was born in Post on November 5, 1923 to Lacy Joshua and Willie Richardson. After graduating from Post High School, he served in World War II with the 11th Air Force in the Aleutian Islands. On November 9, 1946, L.J. married Nora Jo Blacklock. They were blessed with two children, Rebecca Richardson Henson and Mike Richardson. The family moved to Terry County in 1953 when L.J. accepted a position as a cashier at First National Bank of Brownfield. He later graduated from Southern Methodist University Graduate School of Banking in 1959 and remained a banker his entire life. L.J. was active in the community in many organizations over the years: Little League and Babe Ruth Baseball Leagues, Terry County Memorial Action, Coleman Park, School Board, City Council, American Legion, Lions Club, VFW, Boy Scouts, Brownfield Chamber of Commerce, Kendrick Memorial Library, American Red Cross and was a 32nd degree Mason. He was also a member of First Baptist Church, President’s Council of Texas Tech for 30 years, Executive Committee of the Red Raider Club and the director for the Canadian River Project. In 1973 L.J. was named the Outstanding Citizen of Brownfield.