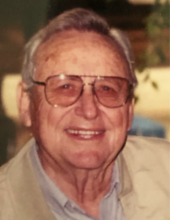 L. J. Sanders, Jr. arrived in Heaven Tuesday morning, November 3rd, 2020, just two months shy of his 91st birthday. The angels rejoiced with the arrival of such a good and faithful servant! He was born in Idalou, Texas, on January 27, 1930, the first child of L. J. and Frances Sanders.

He grew up in Baileyboro, Texas, near Muleshoe, where he attended grade school. L. J. excelled in academics. He advanced several grade levels and played the trombone in the “Muleshoe Yellow Jacket Band.” He graduated from Muleshoe High School in 1946 at just 16 years of age. He entered Texas Technological College in the fall of 1947 alongside a wave of military vets returning to school on the GI Bill. He recalled that many of his college classmates were ten or more years older than him.

From an early age, L. J. had a knack for numbers. In school, he focused on mathematics courses. He graduated from Tech in 1951 with a degree in Petroleum Engineering but not before meeting the love of his life, Virginia Price from Plains, Texas. They were married in a ceremony held at Virginia’s family ranch just west of Plains on August 31, 1951. Together, they began a lifelong romance and a successful marriage that lasted 70 years. L. J. was hired by Pan American Petroleum and Transport after graduation, where he worked in production and later exploration for what became Amoco. He and Virginia raised their family in the oil towns of Texas: Andrews, Odessa, Midland, Ft. Worth, and Houston. He was considered by all who knew him as a competent colleague and extraordinarily selfless person. In 1973, Amoco handpicked L. J. for an exciting assignment in Calgary, Canada. The work allowed him to explore the beauty of Canadian landmarks in Banff, Lake Louise, and Jasper National Park, which he enjoyed immensely. He also traveled internationally for several years, focusing on South American offshore interests.

L. J. worked for the same company his entire career. He was a highly regarded “company man,” a model employee. The innovative work on Bravo Dome CO2highlighted his more than three decades of contributions. He retired in 1985 at just 55 years of age, having achieved the globally recognized distinction and certification of Professional Petroleum Engineer.

Following retirement from Amoco, L. J. and Virginia built their retirement home just one mile from where they were married near Plains. They quickly became active at Plains First United Methodist Church. L. J. served the congregation in various roles, and Virginia played the piano every Sunday. He became a respected community leader focusing his energies on local non-profits. L. J. played a vital role in the creation of the Sandy Land Underground Water Conservation District, where he served as Director. He also served as Director and Chairman of Yoakum County’s Soil and Water Conservation District, as well as, Chairman of Wes- Tex Resource, Conservation and Development Area. He was a central figure in the creation of the Plains Watermelon Round-up, which became a popular West Texas event at the end of summer each year.

The Plains Chamber of Commerce honored him with the Man of the Year Award in 1992. He received the Wildlife Conservationist Region I Honor Award in 2006. He truly glorified God by serving and enriching the lives of others throughout his lifetime. He loved his family, work, travel, and food from around the world. He also enjoyed rooting for Texas Tech’s sports teams, especially the national championship season for the Lady Raider Basketball team. He rarely missed a Dallas Cowboys football game and, more recently, he enjoyed watching Patrick Mahomes lead the Kansas City Chiefs to their Superbowl victory.

Due to the Coronavirus pandemic, a private burial will take place at the Plains Cemetery. Memorial tributes may be sent to First United Methodist Church of Plains, 1202 AvenueG, Plains, Texas 79355.