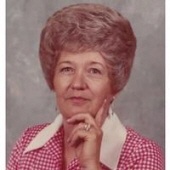 Services for Lora Virginia “Ginger” Roberts will be held at 1 pm Monday, March 21, 2016 at Bethel Baptist Church with Rev. Tony Bishop officiating. Burial will follow at the Terry County Memorial Cemetery under the direction of Brownfield Funeral Home.

Ginger passed away March 18, 2016 in Brownfield. She was born November 11, 1929 in Claremore, OK to Joseph Clyde and Ida Susie Day. Ginger married Bill Heathcoat who passed away in 1957. She then married George Wendell Roberts June 4, 1959 in Brownfield. He preceded her in death in 2010. Ginger was a waitress at the Plaza for many years. She was a member of Bethel Baptist Church. She was a loving mother. Ginger is also preceded in death by her parents; sister, Vivian Wilson; and great grandson, Kevin Turnbow.