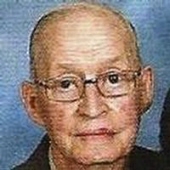 Services for Loyd M. Daughrity, 84, of Brownfield will be held 2pm Wednesday, June 11, 2014 at the First United Methodist Church in Brownfield with Don McWhorter officiating. Burial will follow in the Terry County Memorial Cemetery under the direction of Brownfield Funeral Home.

There will be a family visitation at the Brownfield Funeral Home Tuesday, June 10, 2014 from 6pm to 8pm.

Loyd passed away at his home in Brownfield Sunday June 8, 2014. He was born August 13, 1929 in Marietta, OK to Herbert Carson and Evadell Daughrity. He graduated from Brownfield High School. Loyd Served in the United States Marine Corps from May of 1952 to May of 1954. He married Neoma “Suzi” Savelle on May 20, 2000 in Brownfield. Loyd was a member of the First United Methodist Church, a 32 degree Mason, and a member of the American Legion. Loyd was preceded in death by his wife, Margaret Todd Daughrity, on April 29, 1978, grandson, Loyd Braxton Crutcher, two brothers, A.N. Daughrity, Lavoy Daughrity, and sister, Willodene Parker.