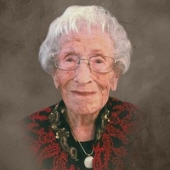 Funeral services for Margaret Jeanette "Jerry" Ricketts Warren, aged 101, of Plains, TX, will be held Tuesday, May 28, 2019 at 2:00PM at the First United Methodist Church of Plains with Pastor Wesley Holland officiating, assisted by retired Methodist minister and nephew Randy Warren. Burial will follow in the Plains Yoakum County Cemetery under the direction of the Brownfield Funeral Home. Visitation will be held Monday, May 27, 2019 from 5:00 PM to 7:00 PM at the Brownfield Funeral Home. She passed away peacefully at her home in Plains on Thursday morning, May 23, 2019.
Margaret was born February 8, 1918 in Parsons, Kansas to James Bailey and Mae Irene Mathis Ricketts. Her father was instrumental in the progression of the railroad west of the Mississippi River in the mid 1920s, during which time the family moved 22 times in her first 21 years. She graduated from New Castle High School, Wyoming, in 1935 before the family moved to Texas. She married James William Warren of Brownfield, in Odessa on September 28, 1940 and they were married 64 years. James and Jerry moved to Plains in 1955, where the couple owned and operated Plains Oil Company from 1955 to 1975. In 1960 they started the foundation of Warren Family Farms which still thrives today in southwest Yoakum County. She had a keen interest in the farming operation and kept her eye on the cotton and peanut production throughout the growing and harvest seasons. She was a homemaker, photograph scrapbooker, and she enjoyed family genealogy, flower gardening and bird watching. Margaret loved to travel, read mystery novels, and to decorate for every changing season and holiday, but her passion was planning for family gatherings, family traditions, and a larger than life legacy of love for her family. Margaret was a member of the Plains Eastern Star. She and James were honored as "Plains Cowboy Super Boosters" and she was active in community, county and church events over these many years. Above all else, Margaret was a faithful servant of the Lord, and she was a member and served in the Plains First United Methodist Church for more than 64 years.
She is preceded in death by her parents Bailey and Irene Ricketts; husband James William Warren, Sr.; son Jerry Robert Warren; daughters-in-law Frances Purdot Warren and Lela Parks Warren; and grandson Jerry Robert Warren, II.
Those left to cherish her memory are son James William (Jim) Warren, Jr. of Plains; daughter Jana Melvin and husband Robert of Vado, NM, Joyce Pierce and husband Joe of Plains, and Joetta Willis and husband Ricky of Brownfield; 13 grandchildren; 26 great-grandchildren; one great-great grandson and one on the way. She is also survived by numerous nieces and nephews, loving friends and special care-givers Maria Chambliss, Jacque Seaton and Janie Allen. The family would like to thank the special care of Home Hospice of Andrews.
Casket bearers will be Russell Warren, Douglas Warren, Wesley Warren, Jason Warren, Monte Pierce and Marte Pierce. Honorary pallbearers will be her great-grandsons.
The family suggest memorials to Plains Methodist Church, Box 396, Plains, TX 79355, the American Cancer Society, or a charity of choice.