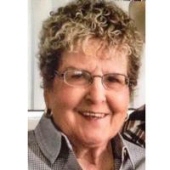 Services for Margaret Laverne Duncan, 82, of Brownfield will be held at 10am on Wednesday, February 8, 2017 at Meadow First United Methodist Church with Bill Titus and Jerry Joplin officiating.

Visitation will be held from 6-8pm Tuesday, February 7, 2017 at Brownfield Funeral Home.

Laverne passed away February 5, 2017 in her home. She was born on February 16, 1934 to Willie Mark and Mattie Lou Joplin in Wilson. She graduated from Meadow High School in 1951 and attended Texas Tech. Laverne married Elvice Duncan on February 3, 1952 in Lubbock. She was a member of Meadow First United Methodist Church where she taught Sunday School, VBS and helped lead music. Laverne had a servant’s heart and it reflected in her kindness towards her family, friends and community. She provided meals to new residents in the community and taking advantage of the opportunity to invite them to church fellowship. She was a caregiver to her family and often referred to as the pillar of the Joplin family. After raising her family and tending to their farm, Laverne worked in the cafeteria at Meadow Independent School district for 18 years and volunteered as a Pink Lady at Covenant Hospital for 10 years. She coached girls’ softball, was a 4-H leader, a 4-H Gold Star recipient and Harvest Festival Candidate. Laverne is preceded in death by her parents, Willie Mark and Mattie Lou Joplin and 8 siblings.