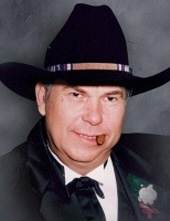 Another member of the "Greatest Generation" has become victorious in his battle to defeat physical death. Marvin ran into the arms of his Savior Jesus Christ. He is whole again and without pain. What a glorious reunion he is having in Heaven! He met physical death head-on, never blinking an eye. It was humbling to witness and how comforted we are that he is now in the presence of God. Happy Homecoming!!! Marvin stepped out of this life into the presence of the Lord on July 11, 2019.

Heaven has received its newest angel. A celebration of life will be at 10 AM Monday, July 15, 2019, at Calvary Baptist Church under the direction of the Brownfield Funeral Home. Burial will be at the Brownfield Cemetery. Marvin Merl Hock was born February 25, 1946. Marvin was the 5th child of Tom and Lela Hock. He attended Wellman Schools. He worked for Glen's Garage and Wrecking for 20 years and he also worked at MPI for 5 years. Marvin had a real gift when it came to working on old cars. His knowledge was extensive and there wasn't a question that he could not answer about an old car. This love led him to join the Nifty Fifty Old Car Club. He was also an avid collector of old guns. Marvin served in the army during the Vietnam years putting his country first protecting our freedom. He took great pleasure in helping others in any way he could throughout his lifetime.

Marvin married the love of his life, Velva Dean Bridges, on December 5, 1968. They have one daughter Kristy Burkett. Those left to cherish his memory are Velva, his loving wife of 50 years; his loving daughter Kristy and husband Scott of Denver City. Just when he thought he was too old to fall in love again, he became a grandfather. His three grand-angels stole his heart from day one. Oh my...nothing made Marvin happier than the time he was able to spend with his precious grandchildren; Bailee, Mackenzie, and Zachary all from Denver City. They were truly the lights of his life. Marvin is also survived by two brothers; T.W. (Dub) Hock of Brownfield and Chester Hock and wife Carma of Hobbs, New Mexico and one sister, Patsy Brown of Joshua, Texas. It goes without saying that Marvin loved his family but more than that he had such a huge sense of pride in his family and all their accomplishments. He leaves behind a host of nieces, nephews, and friends.

Marvin lived in the Brownfield area all of his life but he has relocated and now resides in Beulah Land with Jesus Christ. He was loved and will be missed.

Online condolences may be sent to brownfieldfuneralhome.com