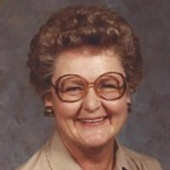 Services for Mary Edna Beck will be at 10:30am Saturday, December 20, 2014 at the Brownfield Church of Christ with grandson-in-law, Doug Richardson, officiating. Burial will follow at Terry County Memorial Cemetery under the direction of Brownfield Funeral Home.

Visitation will be held from 6-8 pm Friday, December 19, 2014 at Brownfield Funeral Home.

Mary passed away Wednesday, December 17, 2014 in Amarillo. She was born in the small Union Community, south of Brownfield on May 8, 1926 to Willie and Edwin May. At the age of five Mary’s mother married Hugh Rowden. He was the only father Mary ever knew. Mary graduated from Union High School and then attended Abilene Christian University.

Mary married M.E. “Dick” Beck on December 18, 1947 at Crescent Hill Church of Christ, now known as Brownfield Church of Christ. She was a lifelong member at Brownfield Church of Christ. She taught many children’s Bible classes and was an avid Bible reader. She was also involved with the Terry County Home Demonstration Club and 4-H Club of Terry County. After all of her community service, Mary was a farmer’s wife and a great homemaker, wonderful mother and grandmother. Mary loved spending her time with her loving family.

In lieu of flowers, please send donations to the Lubbock Children’s Home or your favorite charity.