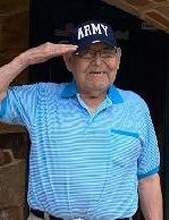 Mateo was born September 21, 1925, in Coy City to Guadalupe and Eduarda Merelez Arrezola. Mateo served in the United States Army from March 27, 1952, until he was honorably discharged on March 27, 1954. He served as a Corporal during the Korean War and played baseball while in the Army. He married the love of his life Ermelinda Nanez on April 21, 1954, in Karnes City. Mateo Moved to Brownfield in 1956 and began his career in farm labor with Murphy May and they began a lifelong friendship. He worked thru out the years with Thurman Skains, E. H. Wood, and Dub Holemann thru the mid 1990’s. Mateo retired in 2000 from Terry County and continued his retirement with his kids and grandchildren. Mateo loved his family with all of his might, he Cherished all his children, grandchildren and great-grandchildren. He was the sweetest man to everyone he encountered.

He is preceded in death by his wife, Ermelinda Arrezola, two brothers, Luis and Charlie, and two sisters, Bernice and Felipa, and his parents.