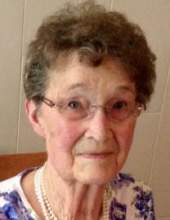 Maureen Davis Smith passed away on June 25, 2020. Born on June 28, 1931, to Leonard Vernon Wagner and Movelda Brooks Wagner in Montgomery County, Arkansas the family soon moved to Terry County. Maureen excelled in school and skipped two grades to graduate from high school at the age of 15. She married Hershel Davis from Brownfield in June1948. Two daughters completed their family. The family attended Calvary Baptist Church in Brownfield for many years. Besides being a homemaker, and mother, Maureen worked in accounting for various businesses over the years. When the family moved to Odessa, Texas in 1966, she worked for GMAC. Hershel preceded her in death in 1994. She later married John Alton Martin and moved to Chapala, Mexico (later relocating to Corpus Christi, Texas). John Alton Martin passed away in late 1998. Returning to Brownfield, Maureen resumed worshipping at Calvary Baptist Church. She helped organize the church library as well as participated in the women’s ministry. She loved the Lord Jesus and spent much time in Bible study and prayer. Hobbies included reading, sewing, making and restoring dolls, crochet, and needlepoint. After several years of widowhood, she married Tom Henry Smith and the couple moved to Burleson, Texas where they lived until Tom Smith passed away in 2013. For several years she lived with family until she moved into assisted living in Sachse, Texas.

She lived every day waiting for that great last day when she would meet her Lord. She “fought the good fight, finished the race, and kept the faith,” 2 Timothy 4:7