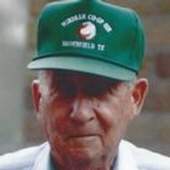 Visitation will be Sunday, September 7, 2014, from 3pm to 5pm at Brownfield Funeral Home.

Mavis passed away on Thursday, September 4, 2014 in Brownfield. He was born August 2, 1920 in Comanche County, to Tom and Minnie Chrestman. He was a World War II, U.S. Army Veteran, and farmed in Terry County for many years. Mavis married Reta Bell Neal in Brownfield on August 2, 1947. She preceded him in death in 1996. He is also preceded in death by two brothers, John Chrestman and T.A. Chrestman, and one granddaughter, Robin Chrestman.

In lieu of flowers, the family requests that donations be made to IntegraCare Hospice of Lubbock.