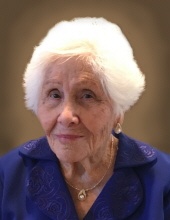 Funeral services for Mercedes Quiñones de Manriquez will be held at 2:00 pm Tuesday, October 1, 2019, at St. Anthony’s Catholic Church with Father Jose Kochuparambil officiating. Burial will follow in the Terry County Memorial Cemetery under the direction of Brownfield Funeral Home.

Mercedes went to be with the Lord on Saturday, September 28, 2019. She was born in Chihuahua, Mexico to Antonio Quiñones and Felicitas Molina Quiñones on November 16, 1925. She married Jose Antonio Manriquez on January 24, 1954, in Nuevo Casas Grandes, Chihuahua, Mexico.