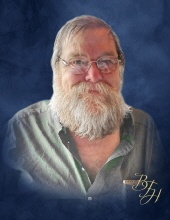 Merlin “Chris” Hobbs was born on November 14, 1958, in Brownfield to the late Merlin and Nell Hobbs. Chris was raised in and spent the first half of his life in Ropesville. In Ropesville, as a child, Chris loved the outdoors and would hunt anything on land or in air, claiming to have shot “every species” of duck—even though they all taste terrible. He spoke frequently and very fondly of the family summer vacations spent at 30-mile camp outside of Creede, Colorado where he would fish for trout and climb mountains with his sister Charlotte. In high school, he turned his focus to athletics where he excelled and enjoyed playing basketball and football.

The second half of Chris’ life was spent on the road as an accomplished long-haul truck driver. He was awarded numerous recognitions, most notably becoming a Million Mile Driver for one of the largest transportation companies in the US. Chris will be remembered as “Gentle Giant”, goofy, silly, often-times inappropriate, one hell of a crappie fisherman, but most recently and importantly he’ll be remembered as “Grandpa”. In his brief time as grandpa, he enjoyed every minute he had with his grandchildren and was hoping to one day pass on his love of fishing to each of them.