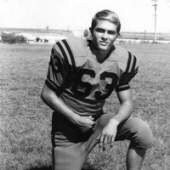 Graveside services will be held November 4, 2017, at 2 p.m. for Michael Dean Pippin, age 69, who left us the October 13, 2017, his hands held by his siblings, Sidney and Sherri.
Mike, as he was known to family and friends, was born March 12, 1948 to Ormal Alfred Pippin and Lecie Elizabeth Beck Pippin in Brownfield, Texas. They took him home to the family farm in Tokio, Texas where he was the little brother of three boys and much later, a big brother to his little sis.
Mike followed his older brothers, Johnny and Sidney into the Navy in 1968 after graduation from Plains High School. Mike served on the aircraft carrier, the Coral Sea with Johnny and Sidney, until an explosion on board. Fear of their parents losing the three sons in an accident, Mike transferred to the aircraft carrier, the Hancock and then a supply ship in Vietnam. He was honorably discharged May 29, 1970 and married Marie Ann Michelbook and gained a son, Arron the next day. July 20, 1974, Mike and Marie were blessed with Michael Roy.
Although Mike, with his mechanical aptitude and work ethic wore many hats during his life and lived numerous places, his heart and soul remained in Tokio and Plains, Texas.
Mike is predeceased by his brother, Johnny Melton Pippin and his parents, Ormal and Lecie. He is survived by his wife, Marie Ann Pippin and son Michael Roy Pippin of Hayward, California and step son, Arron Pippin of Finley, Nevada; his siblings, Alfred Pippin, Sidney Pippin and Sherri Hatfield.