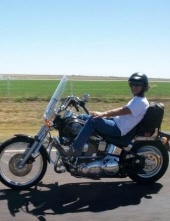 Glen was born to JC and Dora Mae Wooley of Brownfield on February 10, 1959. He was the youngest of four children in a farming family. He accepted Christ as his personal Lord and Savior at a young age. He attended Brownfield High School and began farming in 1976. He farmed from 1976 to 1985. He then had work experience as a mechanic in Austin, moved back to Brownfield and worked in the oil field. Glen purchased Moonlight Window Tinting in 1989. He cultivated his business over many years where many of his customers became like family to him. In his later years, Glen took pride in managing the Wooley farm which originated in 1921 by the late WD Carter.

Glen loved to feel the wind in his hair. He was an avid motorcycle enthusiast and seeker of fun. Riding motorcycles with his children was a favorite pastime of his. You would often find him riding his Harley to Ruidoso or hopping in his Camaro and driving up and down the Texas highways. He was known for his quick wit and sense of humor often calling himself the self-appointed Mayor of Gomez. He is preceded in death by his parents JC and Dora Mae Wooley.

Visitation will be Wednesday, May 5, from 4-6 p.m. at Brownfield Funeral Home. A family burial will be conducted at a later date.